David Cartwright is a "local boy" who first moved to Mottingham in 1971. Educated at Colfes Grammar School, he served as an operational Fire Officer in the London Fire Brigade for some 31 years, receiving the Queen's Fire Service Medal for Distinguished Service in 1992. Following his retirement in 2000, he set up, with his brother, a small family wine business operating from the Borough Market.

In 2008, David was appointed as the Mayor of London's (Boris Johnson) representative on the London Fire and Emergency Planning Authority, upon which he served until 2016, overseeing the effective running of London's Fire Brigade.

In 2014 he was successfully elected as local Councillor for the Mottingham Ward and has held his seat since, being re-elected in 2018 and 2022.

David has served on numerous Bromley Council committees, including the Environment, the Resources and Contracts committees and has, over recent years chaired the Public Protection and Enforcement Committee.

With his colleague Councillor Will Rowlands he runs regular local surgeries both on the Mottingham estate and at Mottingham library, dealing with a wide variety of local issues and problems.

David has worked closely with the Mottingham Residents' Association over his tenure of office, protecting local green-belt and Metropolitan Open Land from unwanted development and closely monitoring local planning applications. He has represented the local community's interests at a number of planning enquiries, and he has been spearheading local environmental and road safety initiatives.

David served as Deputy Mayor of The London Borough of Bromley 2018/2019.

He is married with three grown up children and eight grandchildren all currently living in Mottingham.

His hobbies are Rugby (watching now), Golf and Music.

Mottingham & Chislehurst North lies at the extreme north of the Bromley & Chislehurst constituency and shares boundaries with both the Greenwich and Lewisham constituencies. This contributes to a strong sense of community identity. A large part of the centre of the Ward consists of former council estates along with roads to the west of White Horse Hill which are part of the Parish of Mottingham. The north of the Ward around Eltham College contains older housing including the home of W. G. Grace.Electorate at the 2010 Borough Election: 7,434. 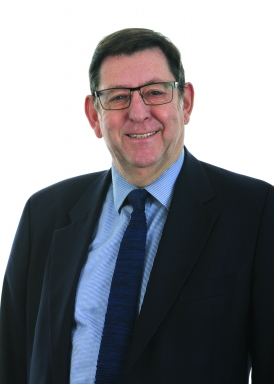